It was 8 days ago that John Oliver’s 13-minute evisceration of FIFA went viral on YouTube; the clip raised doubts about the legitimacy of the World Cup, and fears emerged about disaster in Brazil. Skepticism and concern would appear to be short lived, however, as Robin Van Persie’s aerial header – merely 44 minutes into the first game of play – galvanized World Cup Fever, and reminded international soccer fans as to why it is known as ‘the beautiful game’.

The questionable operations of FIFA have not been the only story which has been swept aside in lieu of the World Cup.  While half the world’s attention remains fixed on Rio de Janeiro, and the other half closely follows developments in Iraq, the Ukrainian-Russian situation has been consistently losing the battle for front-page column inches. Just 3 months ago, the picture above was on the cover of The Economist at the initiation of the conflict, with the chilling title: “New World Order.”

The Ukrainian crisis started in November 2013, when former Ukrainian President Viktor Yanukovych rejected a Free Trade deal with the European Union in favour of closer economic ties with Russia. Thousands of outraged Ukrainians took to the streets of Kiev to protest the move, and demanded the removal of Yanukovych. The situation erupted on February 20th, when Ukrainian troops opened fire on peaceful protestors, killing at least 77 in Kiev.

Ukraine has always had a deep East versus West divide that spans centuries of conquest and conflict. The maps below show the Eastern Half of the country predominately speaks Russian, while the Western half Speaks Ukrainian. This translates into predictable voting patterns seen in the next map, where the East voted for the Pro-Russian Yanukovych and the West for Pro-EU Tymonsenko. 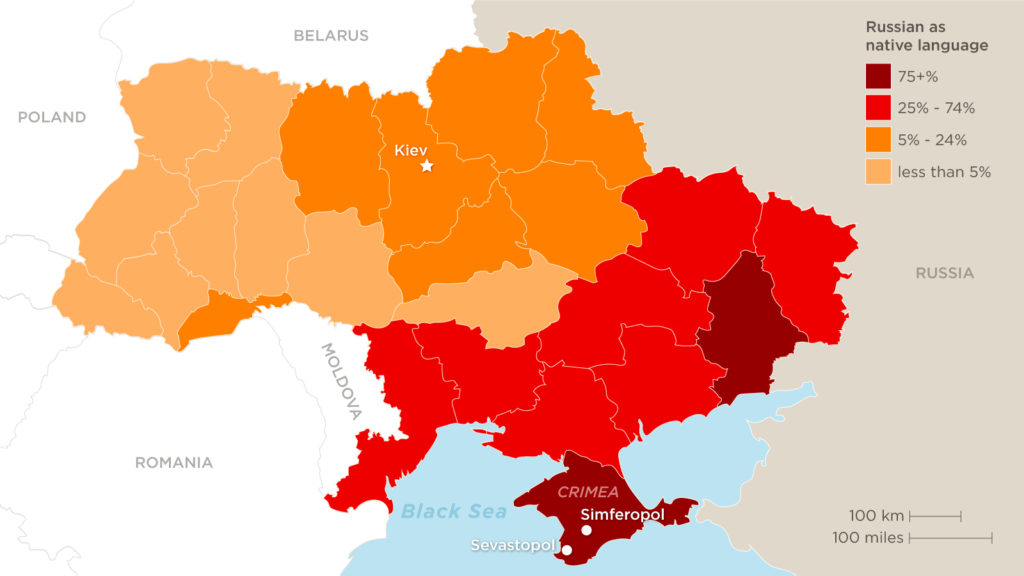 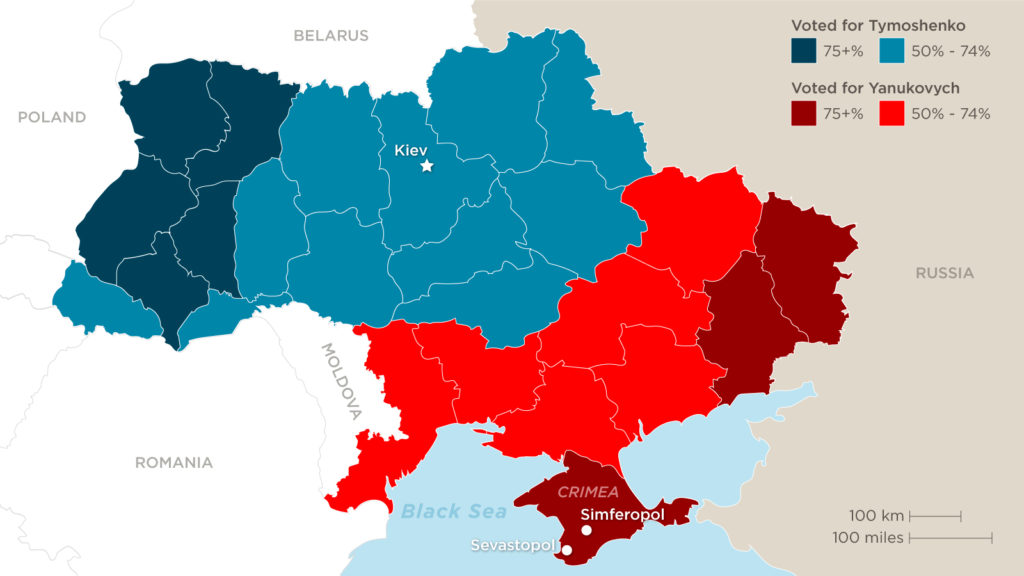 Following the outbreak, President Yanukovych fled Ukraine to Russia, and opposition forces subsequently took control of the capital and installed both an interim President and Prime Minister. Moscow refused to recognize the interim government, and proceeded to mobilize troops in ‘training exercises’ along the Russian-Ukrainian border.

The Ethnic Russians of the East were alarmed by the Opposition takeover and began a separatist counter-revolution, specifically Crimea. Sensing opportunity with the Ukrainian Government in disarray, Putin boldly annexed the Crimean Territory and held a referendum in which its citizens voted overwhelmingly to join the Russian Federation.

The Western Powers were outraged and punished Putin and his inner circle with numerous sanctions. However, Russia is Europe’s #1 supplier of natural gas and they could ill afford to completely ostracize and cut off this vital gas lifeline.

Over the past few months, the country has been immersed in an East-West civil war. Pro-Russian Separatists have lashed out primarily in the Donetsk region against Ukranian Government security forces.  Despite the severity of the situation, the conflict seemed to be cooling off in previous weeks. Ukraine went ahead and elected a new Prime Minister, Petro Poroshenko a wealthy Ukrainian Oligarch who backed the failed 2004 Orange Revolution in Ukraine. Poroshenko was legitimately elected in an early election despite numerous Russian attempts to stoke unrest in the weeks preceding the election.

On Thursday, Poroshenko talked with Putin to try and end their differences. However, the situation has quickly deteriorated back into chaos. On Tuesday, Russian Separatists shot down a Ukrainian Transport Helicopter killing 49 Government Soldiers and Servicemen. Then, Putin cut off all natural gas supply to Ukraine and demanding they repay $4.5 billion in debt. Just this morning, 30 Ukrainian Security Members were ambushed and injured by Russian Separatists.

Until April, Ukraine paid a price of $268 per 1000 cubic meters of natural gas. This is a lowered rate that Russia offers exclusively to former states of the Soviet Union. Russia reneged this rate and raised it to an astounding $458.50 per 1000 cubic meters. The two sides are unable to reach a compromise and Russia has said they will not continue supplying Ukraine until they repay these inflated debts.

The Russian Government owns a 50.01% controlling stake in Gazprom, the natural gas giant Putin has used pawn to bully Ukraine and other bolshie countries. The Ukrainian Prime Minister quipped that: “This is not about gas, this a general plan for the destruction of Ukraine.” Russia and Gazprom represent a crucial supply source to Ukraine but more importantly to the European Union. 15% of EU supply is Russian Natural Gas shipped through Ukrainian Pipelines. The conflict has threatened to disrupt this crucial supply line if its not resolved in a swift and decisive manner.

This situation has developed into a convoluted mess. Religious, Ethnic and Cultural tensions have plagued the region for centuries and show no signs of ceasing. Next week, the European leaders will convene in a EU summit and will have to address the “Russian Problem”. Numerous factors are at play here that could influence their decision.

It seems that the conflict has developed into a political morass for the EU leaders. They need to punish Putin for his blatant acts of aggression without hurting their own economic interests. Unfortunately, there are numerous other elements that further complicate an already nebulous and delicate situation. Russia has been a staunch supporter of Bashar Al Assad’s regime in Syria. His Shia-Alwaite Regime is locked in a bitter conflict with ISIS, the Sunni-Extremist group profiled in our blog. Numerous pundits have hinted at the fact that the US may support Assad and the Iranian Shia government as a proxy in their fight against ISIS. This could put pressure on the EU not to punish Putin and his regime for fear of him removing support for Assad and thus enabling the ISIS.

No matter which way you look at it, the conflagration in Eastern Europe and Middle East is destabilizing the region. The World will watch closely as the EU, the United States and other global players will attempt to protect their interests and prevent the conflict from intensifying.

Tomorrow we will provide an in depth look at the ISIS advance in Iraq and what Barrack Obama can do to bring stability to the region.