The Seasonality of Gold

Following a tough winter, summer has finally arrived in Canada. While, the summer months typically herald warmer temperatures and a cottage exodus for Canadians, the period has marked a historically less rosy picture for gold.

Gold represents a variety of things to investors: a flight to safety, a hedge on inflation, or a precious investment, underlying it all is the fact that the yellow metal remains a commodity which is subject to the ebb and flow of the supply versus demand equilibrium, and as such, is subject to seasonality.

Historically, gold has grown at a compounded annual rate of 7.6% over the last 30 years, but this growth has typically been unevenly distributed over the various months of the year. The chart below, which was obtained from Richard Russell, editor of Dow Theory Letters, displays the historical monthly performance of gold dating between 1980 and 2011. 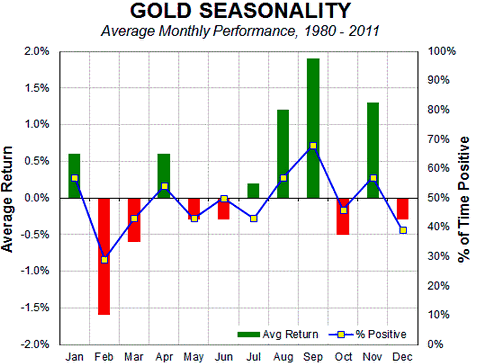 As is readily discernable from the chart, gold typically experiences strong growth in August, September and November, with historically poor performance during most months of the first half of the year. Gold’s relative strength during the second half of the year has been observed in 20 of the last 30 years. However, prices did fall during this period for the remaining 10 years. However, this trend seems to persist over-time, in order to provide more clarity, you must consider the prevailing market conditions. The exhibit below breaks out gold’s monthly performance into specific time periods, and contrasts the figures against the cumulative average data for the period of 1975 to 2013. For context, keep in mind that 1981 to 2000 was a major bear market for gold, while 1975-1980 and 2001 – 2013 were major bull markets. This chart was produced by Casey Research. 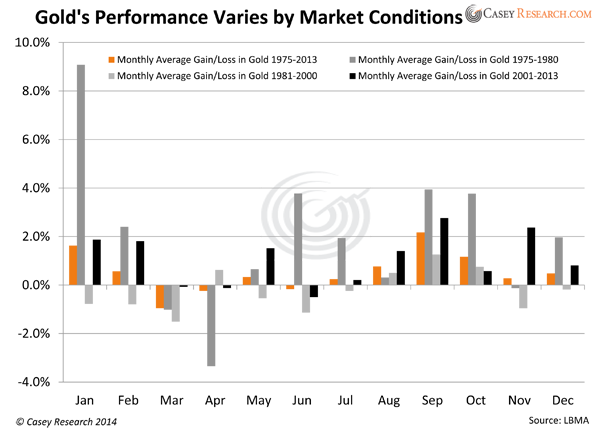 From this chart, it can be seen that the monthly trends exhibited in the first chart are typically accentuated based on prevailing market sentiment towards gold; historically strong months exhibited the best performance during bull markets, while months of typically weaker performance exhibited even worse returns during bear markets. As gold’s most-recent bull market came to an end in 2012, the best indicator for the performance of gold in the near term may be the period of 1981 to 2000 (the light grey bars). In this scenario, it can be seen that May through July are typically weak, with performance picking up again in August.

As stated previously, gold is purchased for a variety of reasons, but demand and supply remains a major driving force behind its performance. This idea can be highlighted by observing the historically strong performance of the commodity during the months of September and January, both of which can be attributed to the world’s top two buyers of gold – China and India. With both Indian wedding season and the five-day Hindu festival of lights, Diwali, landing in October, this leads to a large pickup in demand for gold in September and early October. Similarly, strong Chinese demand emerges during January in anticipation of Chinese New Year and the Lunar Festival. With Chinese demand for coins and jewellery soaring 32% during 2013 and India’s new government pledging to relax gold import restrictions which have hamstrung Indian demand as of late, there is a strong rationale that this seasonally strong performance will be repeated this year.

The overarching theme to keep in mind is that gold, and consequently gold miners and similarly linked equities, are very seasonal investments, and will rebound as surely as they will decline at certain points. To mitigate this, the prudent investor must focus on investing in fundamentally strong businesses, and exhibit willingness to bear temporary market volatility. Commodity prices are inherently cyclical, and a level head and strong focus on fundamental value must be maintained during periods of market ‘noise’.