The Internet & The Advertising Calculus

Few technologies have changed the world as profoundly and as quickly as the Internet. In just over two decades, the Internet has evolved from a small, government sponsored network into a global network with billions of users. It has made information accessible to the masses, made people connected with the single click of a mouse, and changed the way we do everything from banking to shopping.

At the turn of the millennium, there were only 400 million global Internet users, and the Nokia 3310 (pictured above) was one of the most popular cell phones in America. Fast-forward only 14 years, and that number has increased nearly six-fold to 2.6 Billion global users, (see graphic below for an interactive history of internet access from vox.com) and web-enabled smartphones dominate the mobile landscape. Today, a staggering 87% of American adults are using the Internet, while 58% of Americans have a smartphone. In addition, President Obama has committed to a goal of 99% of students with access to High-Speed Internet in the next 5 years.

The world is experiencing an unprecedented era of digital connectivity. Services such as YouTube, Netflix and Facebook have revolutionized the way we talk, watch videos, and communicate. This marks a dramatic paradigm shift as individuals and businesses access the Internet from an increasing amount of devices, such as tablets, laptops and smartphones.

In the past, businesses, and specifically marketing budgets, have mirrored societal trends and consumer behavior. Take two of the most significant inventions of the last 150 years as vivid examples. On November 2nd, 1920, the Pittsburgh Based Radio Station KDKA made the nation’s first radio broadcast. Less than two years later, the first radio advertisement was aired for a New York Real Estate Developer. Businesses realized the utility of radio and allocated its focus and advertising budgets accordingly.

Similar events occurred with the inaugural television broadcast on July 1st, 1941 following FCC approval. A New York company, Bulova Watches, was quick to capitalize on this momentous occasion and aired an ad on the inaugural day. From this point forth, businesses devoted a significant portion of their advertising budgets to television as consumers dedicated increasing amounts of time to the medium.

We have already alluded to the transformative power of the Internet and its significant applications; however, a recent report by Mary Meeker labelled Internet Trends of 2014 reveals some valuable insights into consumers and their adoption of the Internet.  What we found particularly interesting was the following graphic obtained from Meeker’s presentation. 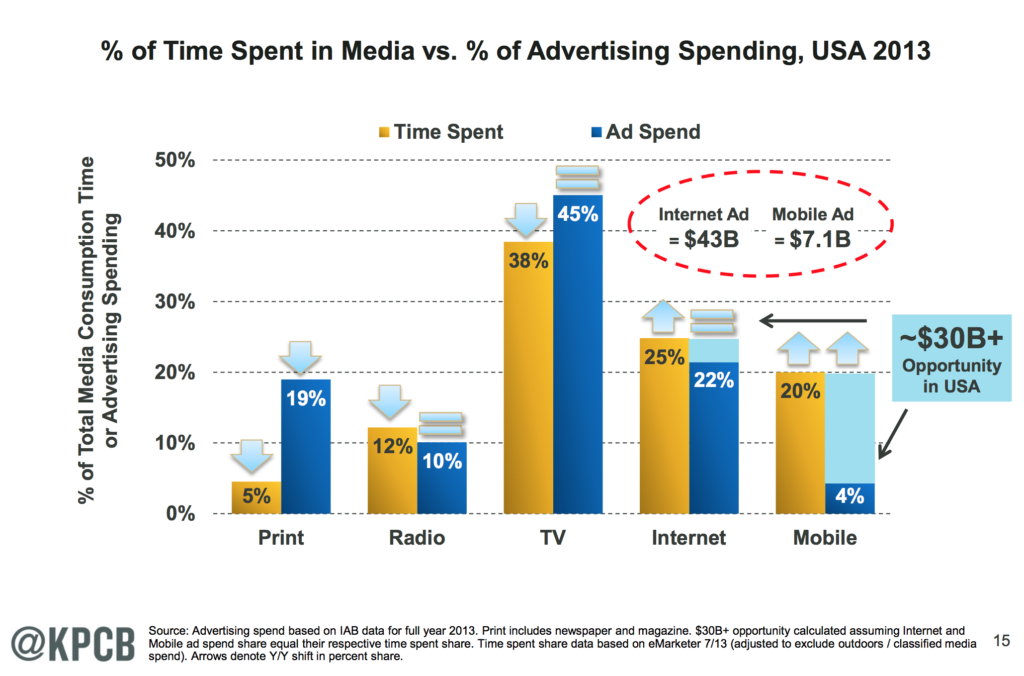 The chart shows that the advertising calculus is in dire need of realignment. Unlike with radio and television, businesses have been slower to shift their marketing budgets to capitalize on the upward trending Internet and Mobile mediums. Meeker’s report suggests a massive shift is on the horizon, from traditional mediums such as print and TV towards the digital mediums of Internet and Mobile.

Both Internet and Mobile media benefit from numerous societal trends and are poised to consume even more of the average user’s time and energy.  Although Internet access is reaching saturation in Western society, wide-spread adoption provides the necessary infrastructure for a full-scale ramp-up of business focus.Along with many other propositions, Meeker suggests that Internet traffic will increasingly flow to mobile devices.

With a shifting landscape of media consumption, many opportunities for growth exist within the market.  Tomorrow’s post will briefly outline some of these areas of opportunity and what these trends mean going forward.