The Impact of the Fort McMurray Wildfires

Alberta’s recent forest fire disaster seems to be never-ending, and Fort McMurray’s wildfire has had – and will continue to have – devastating impacts on both Alberta, and Canada as a nation. The blaze began from the exceptionally dry conditions and strong winds in Fort McMurray, which has led to the 229 000-hectare land coverage from the fire. To put this into perspective, Figure 1 shows the size of the fire in comparison to Toronto when it was only at 85 000 hectares. Consider about triple the highlighted region shown as the size of the present fire dominating Fort McMurray. 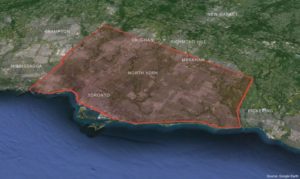 Due to the enormous coverage, and thus, damage involved from the wildfire, it can easily be said that this is one of the costliest natural disasters in Canadian history. Insurance companies have estimated a $9 billion price tag on restoring the town. A wildfire that occurred in Slave Lake, for example, cost insurance companies around $700 million in comparison. The estimated $9 billion figure for Fort McMurray, however, does not account for the cost of additional funding being provided by the government, or the opportunity losses deriving from production halts in Canada’s oil sands capital.

The wildfire comes at a time where Alberta is already grieving the loss of over 40,000 jobs from the downturn in Canada’s oil and resources sector. Due to the inherent dangers in Fort McMurray, the town of over 80 000 people has been forced to evacuate, and many companies have been forced to shut down production.  Alberta’s government has begun distribution of pre-paid debit cards for evacuees of $1250 per adult and $500 per dependent, for a total cost of approximately $100 million. This funding is assisted by millions of donations received by the Red Cross, allowing them to provide $600 per adult and $300 per child for evacuees in funding. The Business Development Bank of Canada has also announced a three-month halt on all principal or interest repayments for Fort McMurray residents, giving them time to get back on their feet. Additionally, Justin Trudeau is facing pressure from Alberta’s government officials to increase Employment Insurance for the thousands of citizens who now find themselves out of work.

At least nine large oil producing companies were shut down last week causing a stoppage of approximately one million barrels per day (bpd) of production. For context, that represents 40% of Canada’s daily oil output, a significant loss to Canadian oil production and fiscal revenue.  Due to the 26.5-million-barrel crude oil stockpile Canada had accumulated by the time of the wildfire, however, gross Canadian supply has been relatively unaffected in the near term. That being said, the news of Fort McMurray’s production halt, in combination with declining supply in other parts of the world such as Nigeria, has conjunctionally propelled oil to a 2016 high of $46. Oil companies are eager to resume production, as many have begun preparing to restart production during the week of May 16th. Royal Dutch Shell Plc has already begun producing again, albeit at a reduced rate, and Enbridge restarted work last week on their 550 000 bpd pipeline. Natural gas has also plunged to its lowest levels since 1985 as 25% of the resource’s demand from Alberta has been cut.

The costly impact of the Fort McMurray fire will take months to recover from. As such, economic growth in Canada as a whole will be largely affected. Comparatively, the Slave Like fire in Alberta five years ago had the ability to decrease oil and energy GDP growth by five percent in the month the fire took place. Slave Lake had a population of only 7000 people, while Fort McMurray hosts a population of over 80,000. RBC has reduced GDP growth estimates to 0.5% from predictions of 1.5% for Canada, while BMO has predicted zero GDP growth.

The team at MacNicol and Associates sends our deepest sympathies to those who are personally suffering or know someone suffering from the impacts of the wildfire.