In case you missed it, our last blog post outlined some powerful insights obtained from Mary Meeker’s annual Internet Trends report. Her underlying thesis suggested that Western Markets are at a saturation point for Internet adoption. However, this is an overwhelmingly positive development – not a negative one – that insinuates the necessary digital infrastructure has reached a sizable critical mass. Meeker suggests that this infrastructure will facilitate a massive increase in data usage rates driven by a series of new and innovative digital applications. Today we will discuss what are opportunities will materialize from these persisting trends and what they mean going forward.

The shifting digital landscape will drastically alter how consumers ‘consume’ media content. We have already seen how the likes of ITunes, YouTube and more recently Netflix have disrupted their respective media markets. Meeker dedicates a significant portion of her report to describe how the television industry will continue to be pressured by digital revelations.

Meeker describes how the traditional model of linear-television is becoming increasingly unpopular and irrelevant. The classic linear model is where content providers (cable and network companies) air content directly to consumers. This has been the way the industry has worked since TVs first started broadcasting in 1941. However, consumers are increasingly rejecting this model and demanding that content should available when they want it. Consumers, empowered by the Internet now want more content on more devices, giving way to a process Meeker calls screen proliferation. The following chart illustrates this process. 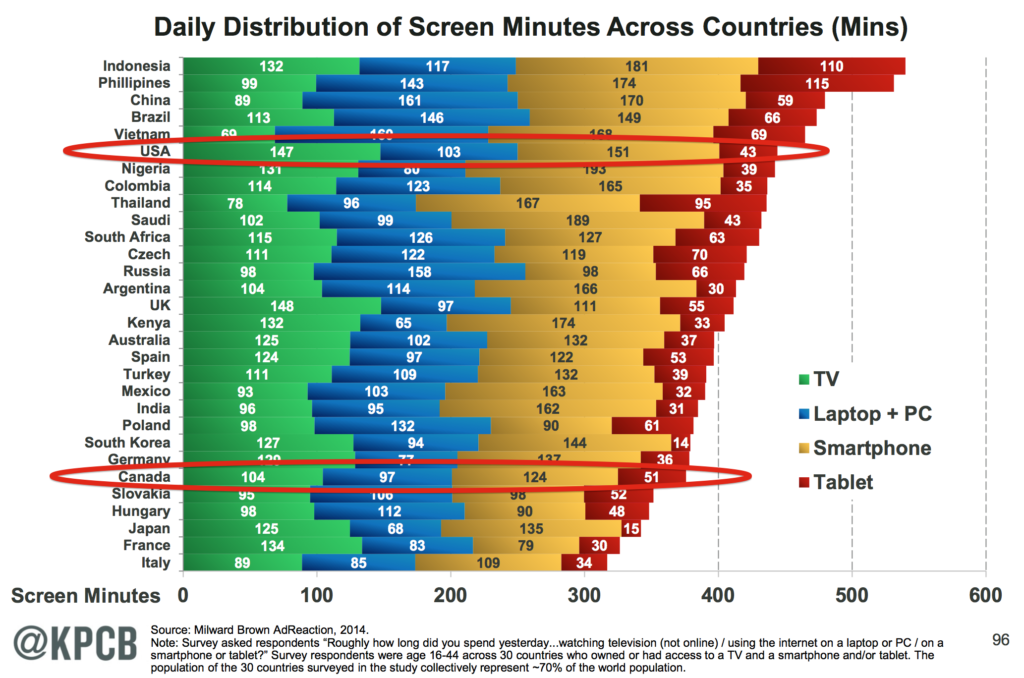 In both Canada and the United States, consumers spend more time viewing or interacting with their smartphone than their TV. Smartphones are now more powerful than ever and allow consumers to take their media with them on the go. Television screens have the lost their 60 year monopoly on video. They are now being increasingly pressured by digital platforms on Smartphones, Tablets and Laptops that allow consumers more choice and personalization. Netflix is a prime example of a distribution strategy in complete contradiction to the linear model because it enables the consumer rather than the content provider. These trends are poised to persist as tech savvy Millennials mature and slowly take over the bustling consumer class. The chart below shows how Millennials rely heavily on digital and on-demand mediums for access to their TV content. 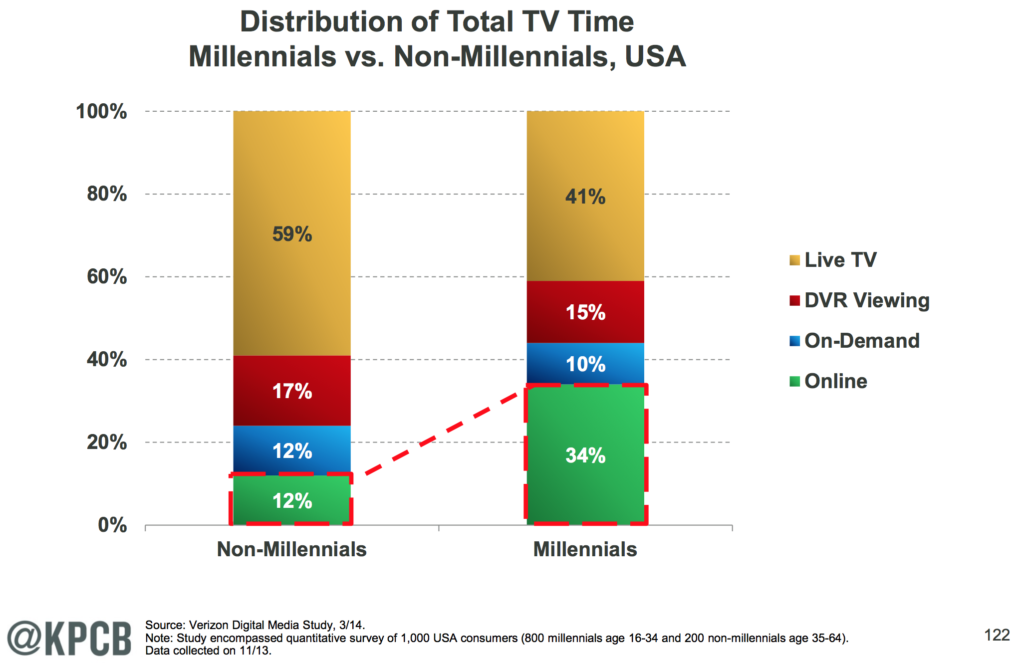 Google TrueView is a web-based advertising platform available on YouTube, one of the most popular website on the Internet. Each day, viewers watch over 200 million hours of video. As the website increases in popularity, Google can leverage its incredible technology to gain insights into its 1 billion unique users. TrueView is set to decimate traditional advertising because it can target specific users based on their unique viewing history. It ensures that users view only relevant ads. In addition, YouTube offers on opt-out within 5 seconds of every ad, and only charges advertisers if consumers watch the full ad. These invaluable insights and cost-per-second billing provide tremendous advantages for Google. Return on Investment using Google TrueView’s platform is infinitely higher than on untargeted, traditional television ads. This is another example of how traditional media industries are being disrupted by digital alternatives.

Digital disruption is not contained to just the television industry. Meeker describes several other industries that are undergoing forceful change thanks to technological innovations. In the past, the music industry has been dominated by direct digital download sales, mainly from Apple’s ITunes service. This allowed consumers to purchase single tracks or entire albums directly from the ITunes application. Meeker provides the chart seen below to show that 2013 marked an important year for the music industry.

2013 marked the first year over year decline in digital track sales. This can be attributed in large part to a booming music streaming industry. Much like in the television industry, streaming services empower consumers by allowing them to access more content, on demand, for less. Several services such as Spotify and Pandora are slowly eroding ITunes stranglehold on the music industry.

ITunes and by extension Apple, is facing an industry that is moving against them. They chose to be proactive and acquire Beats Electronics, maker of premium quality headphones. Much has been made of this purchase, claiming that Apple overpaid for the company. However, numerous analysts highlight the importance that Apple placed on acquiring a music streaming service, and the deal makes a lot more sense when considering Beats launched a digital streaming service in January. By doing so, Apple recognized the industry wide shift and acquired Beats to gain foothold in the streaming market.

It is clear that consumer behavior is shifting. The question is, how are advertisers going to react? Well, digital streaming services have an extremely high cost base. 70% of their subscription revenue goes to cover royalties for the artists who have licensed them their songs.  If Spotify and Pandora continue to remain unprofitable, advertise could intervene and provide targeted ads leveraging the insights provided through a users listening history. There are numerous applications for this going forward.

Meeker’s report outlines numerous other trends and industries that will be affected an increasingly digital world. It is clear that consumer behavior is changing as they become more and more connected. It will be interesting to watch how businesses and advertisers react to these shifts going forward.