The Economics of LeBron’s Homecoming

Few sporting stories have the power to bridge political and cultural divides. Typically, stories about sport tend to be about one of two things: stories of victory or of scandal. We can collectively celebrate the accomplishments of Canadian tennis prodigy Genie Bouchard or we can collectively abhor the racist remarks by disgraced owner Donald Sterling. There are few instances outside of victory or scandal that can bridge the numerous socio-cultural divides of the world. This Friday, was different.

It was Friday, July the 11th, just past 1pm. Several members of the MacNicol team were filing back into the office after grabbing a quick bite to eat. When we all returned to our desks, we received the news that LeBron James had left the Miami Heat to return to his hometown team, in his home state. Yes, LeBron James is returning to the Cleveland Cavaliers.

The average person might be thinking- who cares? You may have a point. The general public typically is not concerned with developments in the NBA free agency market. However, this story is the exception. It is an example of a sports story that is not restricted by cultural boundaries or national borders. The story is being talked about from San Francisco to Shanghai and everywhere in between. Why such the big fuss?
For one, LeBron James truly is an enigma onto himself. The world has watched as LeBron James evolved from teenage phenomenon, to global megastar. James was first thrust into the national spotlight when he became the youngest athlete ever to grace the cover of Sports Illustrated at just 17 years old (pictured below). He then went on to sign a $90 million endorsement deal with Nike as an 18 year old and followed it up by being drafted 1st by his hometown Cleveland Cavaliers in 2003. LeBron has not relinquished the spotlight since. 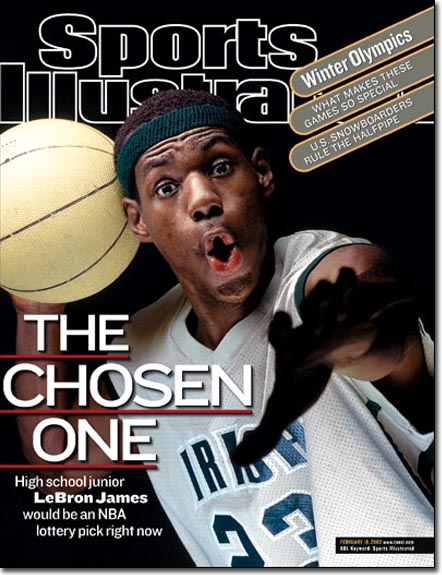 In case you didn’t know, LeBron James is a really, really good basketball player. Since entering the league in 2003 he was won two NBA championships, two Olympic gold medals, two NBA finals MVP, four NBA MVPs, been named to 10 NBA All-Star teams and 10 All-NBA teams and six All-Defensive teams. Some experts say he is the best Basketball player since Michael Jordan- although Kobe Bryant might have something to say about that. He is more than just an athlete; LeBron has become a global icon. Forbes released its annual top 100 most powerful celebrities list in June of 2014. LeBron James placed second on that list behind only Beyonce Knowles. LeBron was ranked higher than fellow megastars such as Jay-Z, Oprah and Katy Perry- not bad for a 29-year old basketball player from Akron, Ohio.

Like Jordan before him, LeBron has become his own individual brand. According to Celebritynetworth.com LeBron made $72 million last year. $53 million of that came just from endorsements and his total net worth is estimated at upwards of $270 million. He is a marketing machine, with lucrative endorsement deals with Nike, McDonalds, Samsung and Coca-Cola. Below is one of his more noteworthy commercials with Nike.

LeBron is also an accomplished Businessman, recently cashing in over $30 million for his 1% ownership stake in Beats Electronics. On top of all of this, he is a dedicated philanthropist through the LeBron James Family Foundation. When considering the entirety of his athletic, philanthropic and business accomplishment it leaves little doubt as to why he is one of the World’s most iconic celebrities. While it is impressive, the LeBron-mania wasn’t fueled by his impressive individual accomplishments. LeBron himself said that his return to Cleveland is “bigger than basketball”.

His return to Cleveland has the potential to not only revitalize a franchise, but to revitalize a city. LeBron’s sudden departure in 2010 was a devastating blow to the city of Cleveland. It is estimated that during his 2003-2010 tenure with the Cavs, he brought $50-$80 million in economic benefits to the city every year. These benefits evaporated after the infamous ‘Decision’ in 2010. The year after he left, Cleveland dropped from 2nd in the league in overall attendance to 19th. Their attendance rate dropped from 100% to 85%– well below the league’s midpoint.  Fans swarmed the streets as they burned his jersey in protest. The impact of LeBron’s decision can be encapsulated into one simple anecdote: before the signing, Forbes estimated the value of Cav’s franchise to be around $515 million. Since then, some estimates have placed the Cav’s value at over $1 billion. That is the LeBron effect, quantified.

Within 8 hours of the announcement, the Cavs sold out their season tickets. The team went 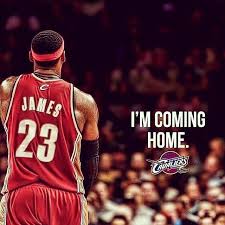 from perennial cellar dweller to championship contender overnight. The city of Cleveland is alive once again.

There are very few cases in which sport has the power to capture the imagination of the world. Too often sport casts a negative shadow over humanity. In recent years we have watched as the likes of Luis Suarez, Lance Armstrong and Oscar Pristorious have disgraced not only themselves but the entire sporting community. The scars of the OJ Simpson and Ben Johnson scandals have yet to heal. The story of LeBron James is the exception. One player, with one decision has managed to transfix a truly global audience. His return provides catharsis and hope to a city in desperate need of both. The eyes of the world are once again firmly fixated on LeBron as he renews his quest for championship glory- and he would not have it any other way.