Today, our team entered the office elated that the World Cup kick off was just hours away. However, our morning took a more ominous turn as we began discussing the recent violent outbreaks in the northern regions of Iraq.  Oil prices have quickly jumped 2% amid fears of further unrest and instability.

Mosul- Iraq’s second city, has been seized by the Islamic State in Iraq and Greater Syria (ISIS for short). The ISIS is an Al Qaeda splinter group that The Economist describes as being: “a group that outdoes even Al Qaeda in brutality and fanaticism.” The ISIS has made massive territorial in advances in Syria and Iraq culminating in the stunning capture of Mosul.

The militant group now occupies a territory approximately the size of Belgium and has showed no signs of curbing their territorial ambitions. The extremist group has stressed their desire to create an Islamic Caliphate in the Middle East; essentially a cluster of Islamic states ruled by Sharia Law. The capture of Mosul occurred so quickly that the US backed Iraqi security forces abandoned their outposts, leaving equipment and their uniforms behind.

Despite their resounding victory, the ISIS is still a long way from controlling or significantly disrupting the countries Oil Supply. Mosul lies in Northern Iraq in predominately Kurdish territory. The ISIS have managed to damage a pipeline that carries between 300 000-400 0000 barrels per day of oil into Turkey. However, the vast majority of Iraqi’s oil supply comes from refineries that lie in the South, on the Persian Gulf. These sources represent about a 2.6 million bpd supply- a far more significant and important region. According to numerous Iraqi reports, these critical supplies remain “very safe.”

ISIS forces will look to advance southward and have set theirs sights on Baghdad as their next target. An ISIS spokesman sad the Sunni ISIS have “old scores to settle with the Shiite led government in Iraq.” Iraq’s Prime Minister Nouri Al-Maliki (pictured below)has insisted that Baghdad’s is prepared to repel any ISIS advance. Despite these assurances, the international community remains unnerved by these developments. 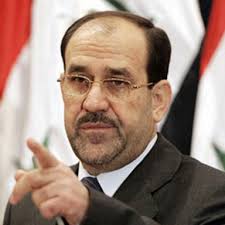 We will be watching these developments closely as this geopolitical disruption will continue to have a significant impact on the price of Oil. For now, enjoy the start World Cup and remember to turnout and vote tonight!