As of late, we at MacNicol & Associates Asset Management have been performing an increased number of obligation free portfolio reviews, which we offer to any individual who may be interested in obtaining a second opinion on their account holdings and management. Through this, we have come across one common thread: the inappropriate use and over-use of Mutual Funds. Mutual Funds are great tools for allowing small investors access to high amounts of diversification and market exposure, however, for larger accounts which are able to explicitly diversify their holdings, there are many disadvantages of Mutual Fund investing which we believe are less transparent than they should be; most of these disadvantages are manifested in the form of costs which may be either not understood or even undisclosed to the average investor. Below, we have listed a breakdown of all the major fees involved in Mutual Fund investing.

Deferred Sales Charges (DSC): Also known as ‘back-end fees’. They are based on a percentage of the market value of the account; peaking in the first year of the investment, and eventually declining to 0% once the investment has been held for a defined period of time. These periods traditionally last anywhere from 5 to 7 years. These fees work to restrict an investor’s liquidity and locks them into an investment which they may or may not wish to remain involved in. It is our belief that these fees are not explained transparently enough. Sometimes these fees can be avoided if the funds are transferred into a fund managed by the same company, this is not guaranteed or particularly common.

Trailer Fees: A fee paid by mutual fund companies to stock brokers or fund dealers, as compensation for selling their funds to investors. Excessive trailer fees may indicate that a salesperson has a conflict of interest and may be suggesting investments for the wrong reasons. This fee is paid annually for as long as the investment is held, and is paid based on the market value of the account; that is, the notional fee actually grows as the account value does also. 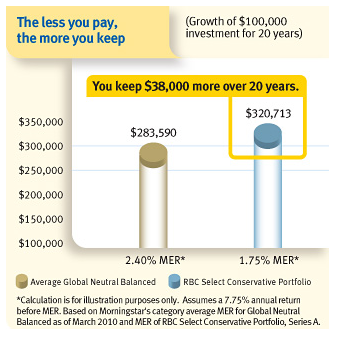 This chart shows that, despite a relatively small difference in MER fees, the actual impact on the growth of capital is massive over time. This is due to the power of compounding interest, which Einstein famously referred to as the ‘8th wonder of the world’. Over time, these seemingly small costs have real detrimental effects on investment portfolios.

We are hopeful that this article has allowed you further insight into the costs associated with investing in Mutual Funds. If you or somebody you know would be interested in a free no obligation portfolio review, please do not hesitate to contact us.