Clash of the Titans

For those who doubt the competitive zeal in the world of business today, look no further than the examples outlined in yesterday’s blog post: Facebook attempted to expand their offering with a smartphone, Apple bought Beats audio for their online streaming business and premium headphone brand, Google bought a ‘smart’ home appliance maker, and Amazon has recently entered the smartphone market.  The world’s largest and most innovative businesses are becoming increasingly large, seek to diversify their offerings at every chance they get, in order to find additional avenues of growth and to steal market share from their competition. This trend is salient among the current titans of the corporate world: Facebook, Google, Apple, and Amazon.

These four companies can all trace their roots to a singular core business offering. Facebook rose to prominence thanks to its superior social media platform. Google profited by creating an accessible way for users to sift through the mass data obtainable through the internet, while also providing an additional marketing medium for businesses. Apple’s success can be attributed to their superior iPhone, iPod and Macintosh devices, and Amazon has been a pioneer of online shopping. These companies introduced influential and disruptive changes to their respective industries, however, they have now come to a point of relative saturation in respect to their primary offerings, and must widen their scope to achieve meaningful growth, appease their shareholders, and justify their lofty valuations. 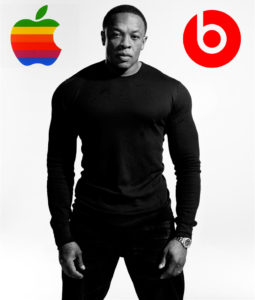 Every one of these companies has experienced a unique set of circumstances which has forced them to alter their business model. Apple’s key products have experienced a plateau in sales growth, and the company’s ability to innovate is being constantly debated in the post- Steve Jobs era. ITunes’ music sales have also begun to lag, exhibiting its first year-over-year decline in multiple years, as users flock to streaming sites such as Spotify and Pandora; this has caused the company to pursue a $3.2 billion take-over of Beats Audio (see image left), which manufactures premium headphones and also boasts a promising music streaming service. Google has experienced its own personal tribulations as well, as they watched Apple unveil its HomeKit for ios8, which allows iPhone users to control their home appliances, lights, locks and thermostats from their iPhone. Naturally, Google has announced the crowd-sourcing of its recent purchase, Nest Labs, in order to counteract Apple’s inroads into what is being referred to as the ‘smart home’.

Despite – along with eBay – dominating the online retail market, Jeff Bezos and Amazon have watched the company’s stock fall nearly 20% since December of 2013. In order to offer their relatively lower prices, Amazon has been operating on a foundation of razor-thin margins and ruthless negotiation tactics with suppliers, a tactic which has proven insufficient to bolster corporate profits. This explains why the company is pursuing additional avenues of growth and introducing new appendages to their business plan; they are seeking to extend themselves to areas of promising growth, and insulate itself for its competition.

As these companies increasingly encroach on one another’s operating space, the stakes will escalate and the competition will surely intensify, which is not altogether a bad thing for consumers. Corporate competition is an inevitable byproduct of capitalism, and increased competition is hoped to force companies to innovate and to produce a better product for less. As such, expect these four companies, as well as others, to continue to make more ambitious forays into unproven and even ultra-competitive markets. 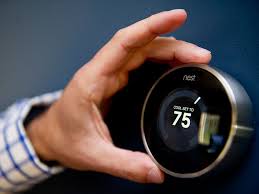 To summarize, what seemed like an ill-advised entrance into a saturated smartphone market, is perhaps an encouraging and positive move by Amazon; it also speaks to their ambitions of diversification and disruption, which are mirrored by the industry as a whole. We plan to continue to monitor this ‘clash of the titans’, as some of the biggest and most innovative businesses tend to transcend any single industry. Amazon now makes phones, Google manufactures thermostats (see image right), and Apple makes premium headphones. Together, they blur the distinction between what is profitable, what is probable, and ultimately what is possible.