American Tea with a European Flavour

This week, our blog has focused on the EU parliamentary elections and its broader impact on Europe as a whole. Yesterday’s blog post outlined how the victory of once fringe candidates in the UK, France, Austria, Hungary and others represents a shifting European attitude.

These unconventional candidates can only succeed in unconventional times.  In an article published in January by The Economist, the publication aptly compared the ‘European insurgents’ to the American Tea Party movement. The article outlines striking parallels between the two movements.  The similarities range from their guiding principles, to their rapid integration into the political mainstream and the subsequent polarization of the political system.

“They are angry people, harking back to simpler times. They worry about immigration. They spring from the squeezed middle—people who feel that the elite at the top and the scroungers at the bottom are prospering at the expense of ordinary working people. And they believe the centre of power—Washington or Brussels—is bulging with bureaucrats hatching schemes to run people’s lives.”

The similarities between the two movements are indeed eerie. The Tea Party movement was a success because it harnessed the rejectionist sentiment of a vocal minority who despised big government, Obamacare and a growing national debt. They rose to prominence during the 2010 midterm elections – which generally have lower turnouts – amplifying the voting power of this vocal minority. 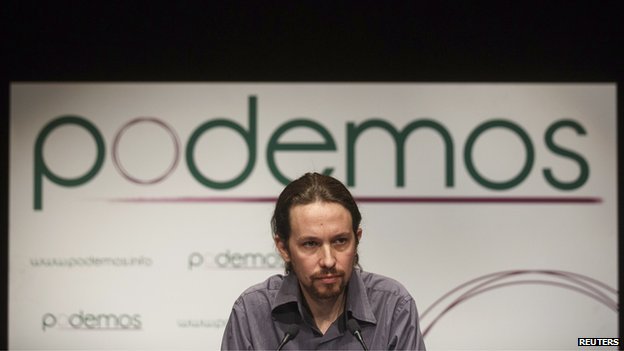 From this point forth, the American legislature was polarized by a wave of fanatical politicians who crusaded against the politics of the mainstream. Were the elections of the past week a form of déjà vu for Europe? Extreme candidates across the continent found fertile ground in the form of continued economic futility and an incompetent and out of touch mainstream. The ascension of the Podemos Party in Spain is particularly telling. Podemos literally means ‘We Can’. The party was created after a series of Indignados (the outraged) protests fizzled out four months ago. Today, Podemos, a party spawned out of protest and barely 100 days old will send 5 MEPs to the European Parliament in Strasbourg.

These are truly extraordinary and telling times. A party such as Podemos can only exist if the proper psyche and problems not only exist, but also persist. As referenced in yesterday’s post, the outcome of the elections signifies a tectonic shift in European sentiment. Now the onus lies on the battered mainstream to recognize and adequately respond to the change necessitated by the result of the elections.

Will Europe’s political ‘insurgents’ have the same disruptive and polarizing effects as the Tea Party movement in the US? It’s hard to say. Regardless of the answer to that question, one should recognize these seismic shifts in sentiment and be prepared for their consequences in years to come.