Ontarians across the province will have a difficult choice to make on Thursday. Yesterday, we outlined the platform of the incumbent Liberal Party of Ontario led by current premier Kathleen Wynne. Today we will outline the platform of their main opposition: the Progressive Conservatives led by their stoic party head Tim Hudak.

The PCs are committed to unseating the Liberals, who they see as incompetent and corrupt. Hudak and his PCs have numerous conditions working in their favour. The Liberals have been their own worst enemy for exposing themselves to several debilitating scandals. The Gas Plant and Ornge scandals have provided plenty of ammunition for Hudak and NDP leader Andrea Horwath to use in the debate and in the press.

Hudak, the 46-year-old son of a Catholic School Principal, relies on his economics background to guide him on his policy decisions. He received his Masters in Economics from the University of Washington, and his plan has consisted of a single message: jobs. He has consistently repeated his economic plan that his PC party claims will bring 1 million jobs to Ontario in the next eight years. He is so confident in his million jobs plan that during the recently televised debate, he said he would resign in office if he did not reach the million-job mark by 2022. 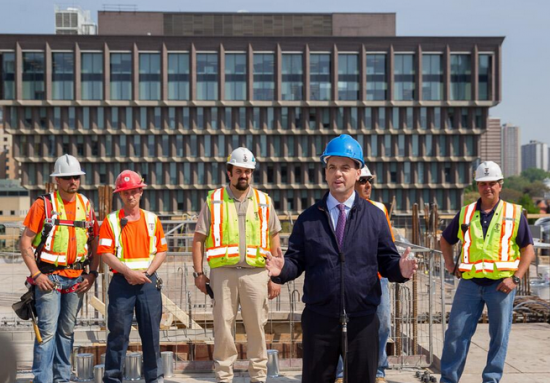 Predictably, Hudak’s lofty 1 million jobs claim has drawn a tremendous amount of criticism. Many have pointed to the fact that there are currently only 549 000 unemployed people in Ontario. A recent article in Macleans points to the fact that Ontario will have to grow at a rate of 10% over the next five years. This over five times current forecasts and a full 2% higher than the 7.8% rate in which China’s GDP grew in 2013.  The specifics of the plan are outlined in detail on his campaign website, but below are some of the major pillars.

The plan consists of a series of tax cuts and budget-balancing measures that will alleviate some of the fiscal burden on the Ontario economy. Hudak plans to erase the $12.5 billion deficit and balance the budget in two years- as opposed to the three years proposed by the Liberals. He plans to cut the province’s business tax by 30%, making it the lowest rate in North America. He also plans to cut 100 000 public sector jobs to eliminate government redundancies and inefficiencies. This will be accompanied by a two-year pay freeze for all remaining government employees, as well as public benefits being readjusted to match the private sector.

Hudak claims that balancing the balancing the budget, cutting taxes and trimming the public sector will unleash the Ontario economy. Once the budget is balanced, Hudak plans to cut income taxes across the board.

The PCs have made transportation their number one focus for capital spending. While the Liberals plan to improve transportation through contributions obtained through the gas tax, Hudak’s plan does not include tax increases. Instead, it will be achieved by investing surpluses, finding savings in current operations, and by involving the private sector. The PCs claim these sources will raise the necessary $2 billion per year needed for infrastructure investments, specifically a cross town East/West Subway line in Toronto, expanded Highways, and an improved GO service.

Hudak has articulated a straight-forward, pro-business message that he hopes will resonate with frustrated voters, and he has staked his reputation and his campaign on his million jobs promise. But before that, it would seem that he needs the help of a million voters to put this plan into action.