Ah yes, it is that time of year again. Only during the election season can the beautiful, frenetic action of the Stanley Cup Finals be interrupted with two minutes of slanderous and vicious political attack ads. This Thursday, voters across the province will take to the polls to determine the next legislature in Queen’s Park.  In the coming three days, our blog will provide a brief summary of the Liberal, Tory and NDP platforms and what can be expected if they are elected. We aim to make voting a quick and painless process. We will begin our analysis with the incumbent Liberal Party.

The Liberals have dominated the Provincial Parliament since the election of Premier Dalton McGuinty in 2003. After a controversial, near decade-long tenure, McGuinty announced his intention to resign in October of 2012, and was subsequently replaced by current premier Kathleen Wynne- the two are pictured below.

The feisty, 61 year old Wynne has an extensive background in education, and a plethora of experience in the provincial legislature as both the Minister of Education and Transportation. Despite her experienced and generally respected track record, she has been largely overshadowed by the baggage she has inherited from her predecessor.

Wynne spent the majority of the June 3rd televised debate rebuking charges of cronyism, corruption and incompetence. She was attacked relentlessly for her role in the 2011 gas plant scandal, where two natural gas plants were shut down for political purposes, costing the taxpayers some $600 million. The Ornge scandal is equally troubling. It was found that Chris Mazza (pictured below), CEO of the province’s publicly funded air ambulance serviced collected some $9.3 million in payments from the Liberal government over a six-year period. Wynne has spent valuable time and column inches defending these charges and has been unable to direct significant attention to the Liberal platform. 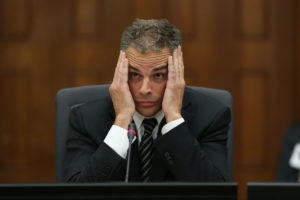 Scandals aside, the Liberals have proposed some modest reforms to balance the budget and to address some of the province’s most pressing issues. The Liberals promise to balance the budget in 3 years, erasing the current $12.5 Billion deficit. They plan to do this by freezing public spending and instituting modest tax reform by lowering the limit on the top tax bracket to $220 000 (at a rate of 13.16%), and cutting the small business deduction used by many corporations.

The Liberals also propose to dedicate $29 Billion over the next 10 years to transportation and infrastructure projects. $15 billion will be dedicated to the GTA, with a goal of upgrading the Go Train service and making a train available on each line within 15 minutes. $14 billion will be dedicated to projects outside the GTA and to create a permanent fund for various road and bridge projects.

More audaciously, Wynne plans to create an Ontario Pension Plan, to supplement the existing Canadian Pension Plan. Amid an onslaught of scrutiny, the Liberals have found it difficult to communicate their stated accomplishments, such as having the lowest per capita spending rate across the provinces. Ontario also spends the second least per capita on health care, which typically represents a massive proportion of spending.

Despite their relatively moderate platform, the Liberals have continued to be held in contempt for scandals of the past; looking to push past the controversy, Kathleen Wynne seeks to guide her party to another narrow victory.